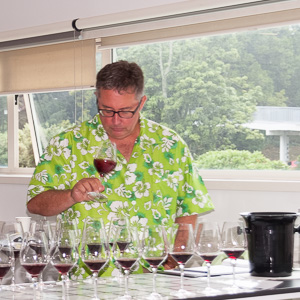 Colin Ford is a 30 year veteran of the wine trade.  Beginning in hospitality, he went on to work for New Zealand’s first wine distributor, Brown & Garvey, way back in the mid 1980’s.

After a travelling to Australia, California and Europe to visit and work during vintage with some of the world’s most respected wine producers, Colin was a specialist on-premise and fine wine retail account manager for Kitchener Wines in Auckland, through the  1990’s.  During this time he participated in the study program for the Institute of Masters of Wine and developed his writing and tasting skills to a high degree.

He then worked for a spell in the United States, helping to establish a successful importer and distributor of exclusively New Zealand wines, just north of San Francisco, California.

Colin is a judge at the Air New Zealand Wine Awards, the New Zealand International Wine Show and has judged at the New Zealand Hospitality Championships.  He has been a tasting panel member for WineNZ and Dish magazines.

Jean Ford was a founding shareholder and director of Winework Solutions.

During her career, she was a company director for over 50 years and contributed her administrative, office management and commercial experience to our business.  Now retired, Jean remains a principal shareholder in Winework Solutions Limited.